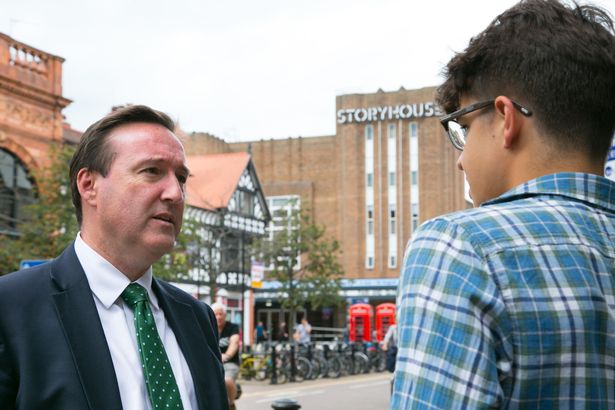 A backbench Cheshire Conservative MP has said he’s appalled about the selfishness at the heart of government after the Prime Minister, Boris Johnson and Chancellor, Rishi Sunak were fined over Partygate yesterday (April 12).

The pair were issued fixed penalties by the Metropolitan Police as Scotland Yard said more than 50 fines will be issued as part of its inquiry into lockdown breaking in Downing Street and Whitehall. It comes after the Metropolitan Police announced 30 additional fines in relation to Operation Hillman, which is looking into breaches of Covid-19 regulations at the top of government.

It is the first time, in UK history, that a sitting Prime Minister has been issued with a fine by police and there have been calls for Mr Johnson and his Chancellor to resign.

Edward Timpson, the Conservative MP for Eddisbury, issued an extraordinary statement criticising the government and expressing sympathy for those who lost loved ones during the pandemic. The statement issued to Cheshire Live today (April 13), said: “We have—many of us—had to part company forever with people we have loved, but in such a difficult and distant way, and one that we will never get the chance to improve upon.

“That moment is gone, because we did the right thing and obeyed the health regulations, and took our responsibility for the health of others seriously.

“I am appalled that we did not see that selflessness at the heart of government, and can only say it makes the example that those who have contacted me about their own experiences set shine all the greater. Thank you.

“Those setting the regulations—leaders—should lead by example. That did not happen in these cases, as the Metropolitan Police has made clear by issuing fixed penalty notices this week. I find that shameful—as do my [Conservative] Party colleagues—even if the fines only carry the same legal weight as a parking ticket.

“I feel we must look to the rules-based society which our democracy exists to uphold, and ensure that all are treated equally in it, whatever their station in life, and even when they didn’t think those rules were being broken. Those who devised the health regulations and didn’t always obey them have been subject to the same penalties they also devised, and they have paid those penalties and apologised.

“I am pleased there is no sign of special treatment—that would be intolerable.” He added that he hopes it shows that “backbench constituency MPs like me are not prepared to defend the indefensible.”

Meanwhile, Labour MP Chris Matheson, who represent the City of Chester, said: “Absolutely outrageous! Once again, they think it’s one rule for them, and another for the rest of us. And what has been most striking about this whole business?

“It is the number of constituents who’ve emailed me who were unable to join their loved ones, or perhaps be with them in their final hours, because they were following the rules, while these people had a party, they’ve lied to us consistently. They’ve lied to Parliament consistently. Now the truth is out, they must both resign.”

Justin Madders, Labour MP Ellesmere Port, said: “Yes they should both go- those who made the law cannot then break it. Having asked the entire nation to stay away from loved ones during the pandemic for the Prime Minister and Chancellor to have been found to have broken the rules themselves is an insult to every law abiding citizen in this country and an untenable position for them to be in.

“In addition, the Prime Minister repeatedly lied to Parliament about his involvement in these parties which is also a resigning matter in its own right. “

Mike Amesbury, Weaver Vale Labour MP, Shadow Local Government Minister, said: “Both Johnson and Sunak broke the law, the law they created for the purpose of protecting the NHS and saving lives. The vast majority of citizens in Cheshire and across the country followed the law, sometimes in heart-breaking circumstances.

“This is the first time in history a serving Prime Minister has been found to have broken the law. Johnson made matters worse in trying to cover up the law-breaking by continually lying to Parliament and the public about the parties and social gatherings at Downing Street and his own involvement.

“The Ministerial Code is clear. Ministers are expected to comply with the law at all times and ministers who knowingly mislead Parliament, are expected to offer their resignation. Johnson and Sunak need to go – immediately.”

A spokesman for Andy Carter, Conservative Warrington South MP, said: “Andy Carter is out of the country and would not make a statement as he sits on the board of the Standards Committee and that would be contrary to protocol.”