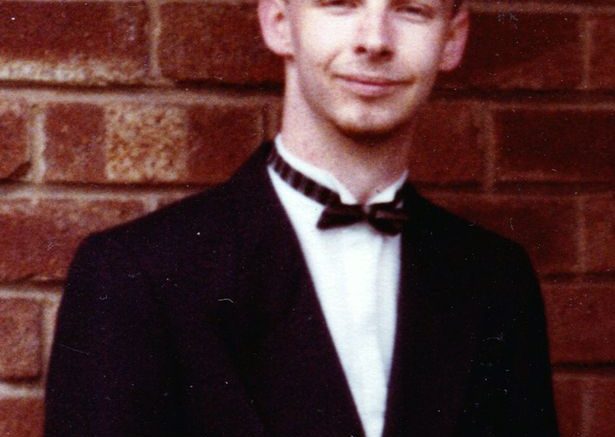 A Cheshire man has recalled horrifying experiences – after being forced into conversion therapy.

Chris Butler, from Warrington, says he endured physical violence for many years, including having his head pushed into church ground by three men to ‘release him of demons’ that cause his homosexuality.

The 54-year-old grew up in a secular household but was sent to a religious school because it had an impressive academic record.

Read more of the top stories from across Cheshire here.

But Chris feels that it was the methods used during the conversion therapy that had the greatest psychological impact on him.

He told the ECHO : “You can’t change the past but institutional homophobia within the church and the conversion therapy movement actually robbed me of healthy late teens, the biggest chunks of my twenties and I was still unpicking the psychological damage well into my thirties and forties.”

The freelance writer and artist attended the same school from the age of five right up until he was 16.

There, he says there was a “drip feed of religious indoctrination” which ultimately led him to attend a Billy Graham rally in Liverpool.

Billy was a prominent American evangelical Christian figure who visited Anfield to speak to the masses.

Chris, just 18 at the time, went forward affront of the crowds and made a commitment to Christianity, something he says done out of “a misplaced sense of guilt and fear.”

He explained: “My conversion to evangelical Christianity was a car crash waiting to happen. My school was in the 1970/80s and at that stage, societal homophobia was rife.

“Once I started to get an awareness of my sexuality in my early teens, it was very much at odds with societal attitudes and at odds with the religious line that was being taught at school.

“My attitude towards my sexuality was one of fear and there was a lot of internalised homophobia so for me, unfortunately I ended up at a rally and laid a commitment to Christianity.”

After this, Chris, originally from Warrington, was referred back to his local church but once they became aware of his “sinful” sexuality, he was pushed towards a conversion therapy ministry.

Chris explained it is hard for him to pinpoint an exact moment when he realised he was gay.

He added: “It’s difficult to say at what age I realised. When I look back now, I became sexually aware at a young age, I would say how I quantified my sexuality was probably quite confused at least until the age of 15.

“That’s when I really knew I was gay because in terms of my sexual attraction to men that was the age I was wanting to get my emotional needs met from the same sex.”

However, joking that he might have ‘the longest coming out story in history,’ Chris said he didn’t officially come out till he was 26-years-old after falling in love for the first time, something the church saw as an “illicit affair.”

At this point, he started to realise cracks between his relationship with the church and conversion therapy and began living two different lives as two very different people.

He recalled: “It was a secret relationship but all of a sudden, the world stopped being so black and white, I lived in suppression until that age.

“After, I had a very long period where I lived a very schizophrenic existence. The two sides of my life became increasingly split.

During the time spent undergoing conversion therapy, Chris, who now lives in Halewood, says some abusive tactics used by the church to ‘cure’ him were more obvious and overt than others.

Explaining the process ‘isn’t as black and white as people think,’ Chris bravely told the ECHO one cruel method he was subjected to: “The worst one was when I was held down on the floor of a church vestry and one of the big church lectionary bible was pressed on my head.

“It was pressing my head down against the floor, I was being held down by three men and supposedly being exorcised of demons that were believed to be causing my sexual orientation. That happened on numerous occasions and it was seen as normal.”

Despite the physical abuse, Chris recalls finding the psychological methods much worse.

He said: “One of the difficulties is when electric shocking was banned, conversion therapy didn’t go away, it just became more subtle with an emphasis put on supposed talking therapies within the church.

“The church, at that time, was very good at cherry picking from psychotherapy practices, taking the bits they wanted.

“The worst part of conversion therapy for me was actually the whole of my private life basically being demanded from the church.

“I had to expose all the intimate details of my private life on a day-by-day basis to make myself accountable.

“The veneer of this is that the church would use the teaching of confession and making yourself accountable in front of the church and their leaders and Christ.

Dismissing it as nothing more than a technique of coercive control, Chris added: “The reality of it was basically your private life was being invaded, having to recount daily details both of your thoughts and your actions.

“No one’s private life should be invaded like that, nobody should be having to recount every intimate detail of your thoughts, your words and your sex life.”

Looking back, Chris says his sex life at the time was co-opted by the church saying they felt like it was their property to control.

Speaking more about the psychological techniques, he elaborated: “A lot of the conversion therapy techniques is evolved around the laying on the hands, healing prayer, so you are constantly being prayed for when there is actually nothing wrong with you.

“Now, I see that to a certain extent I might as well be involved in a cult when I got involved in the whole movement.”

“When you’re being told what you think and feel is wrong and sinful it’s like a slow drip feed.

“It played on my own internalised homophobia, all because of a toxic set of misguided teachings. Supposedly Christian teachings that had very little basis and only included a select of biblical readings.”

While all this was happening, Chris’ family were left in the dark and much to their shock, only found out what he experienced years later.

He said: “A key thing about conversion therapy is shame and secret, you feel shame over your sexuality and it’s compounded by the practices you are being subjected to which makes you not tell anyone.”

“My parents only really began to discover the extent of what I had been through only when I began speaking out. I had a couple of conversations with my parents as I wanted them to hear it from me rather than through the radio.”

Ageing towards the start of his thirties, Chris actively began to distance himself from the church and conversion therapy but says his “fear of God was so deeply engraved” that it took him almost a decade to finally walk away.

Another reason he says it took so long was because ‘similar to people who are involved in cults, he had to begin a psychological separation and look for self-forgiveness, self-acceptance and deal with issues of internalised homophobia and self-hatred.’

He explained that once he took a stance against his church mentors and leaders in the early 2000s, the friendships he believed to be genuine vanished instantly.

Chris counts himself as one of the lucky ones who came through it on the other side with still some form of personal spirituality, something he says, it’s a great source of comfort and strength to him.

As a result of his relationship with the church, Chris studied theology in London and was finally able to take a step back and question and analyse the biblical texts which were once used against him.

Chris hopes one day to recount his experiences in a book that will “ultimately call out the theological misuses of the bible.”