Looking for something to do in Crewe? Whether you're a local, new in town or just cruising through we've got loads of great tips and events to offer. Find out what’s on in Crewe with our regularly updated events calendar featuring the best upcoming events in Crewe and the area.

This guide lists events at a glance, showing what’s on each month. See the highlights of What’s On for Crewe, featuring the best of things to do in Crewe – Live Music and Gigs, Family Events, Art & Culture, Food & Drink and much more. Crewe fundraisers and charity events.

Important This Event Calendar is not maintained on a daily basis and some events may have changed dates or are no longer happening. Please double-check the event websites for the most up-to-date information. 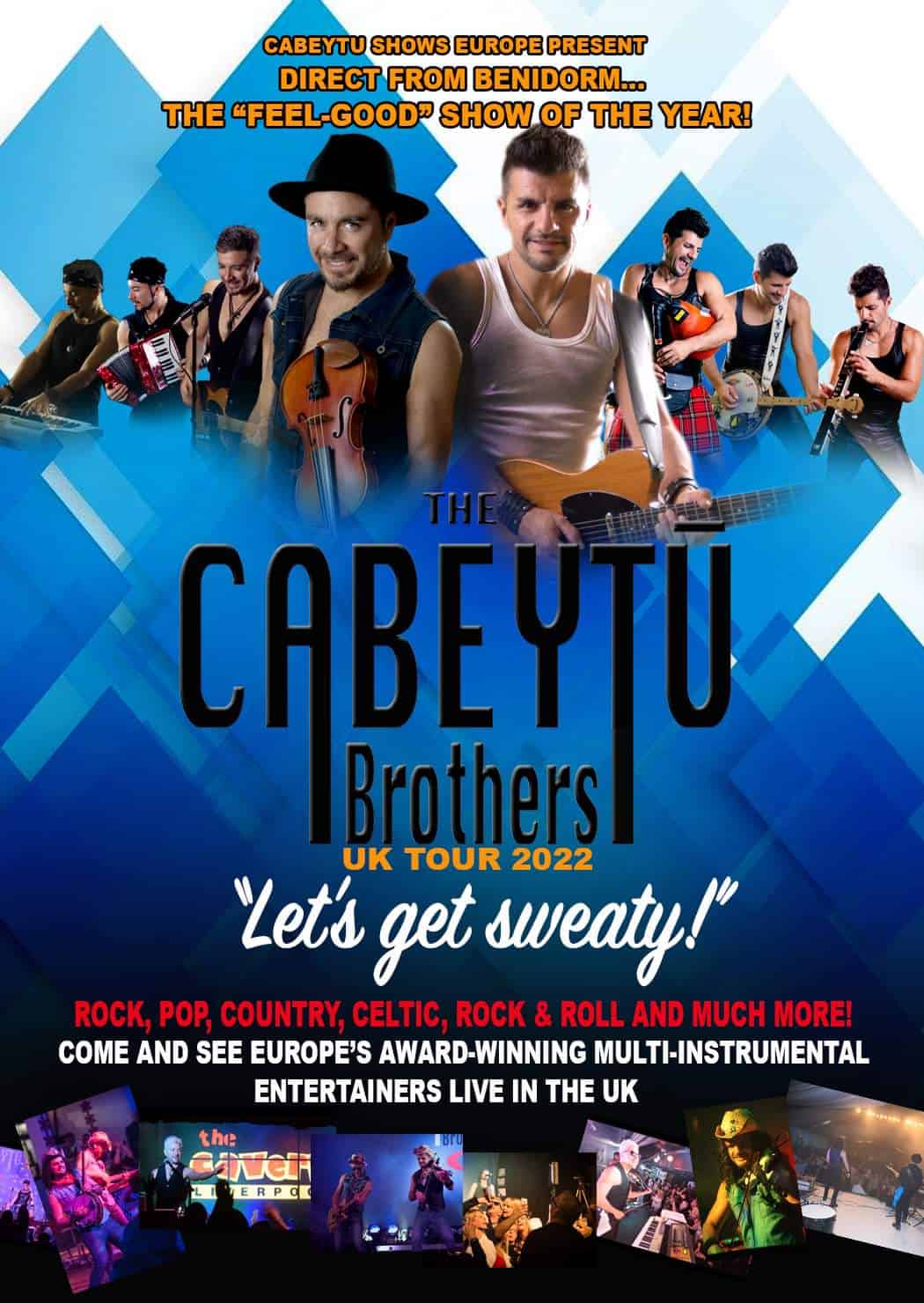 Benidorm’s Top Entertainers’ UK Tour Coming to Crewe
The number one international act from the nightlife fun capital of Europe, Benidorm, have announced they’re coming to Crewe as part of their “Let’s Get Sweaty!” 2022 UK Tour, on Sunday the 11th of December.
The Cabeytu Brothers are widely recognised as Europe’s number one multi-instrumental showmen, having entertained thousands of holidaymakers in the famous Spanish Costa Blanca holiday hot-spot for many years.
This will be their seventh UK Tour (most of their shows sell-out) but their first visit to Crewe, where the brothers are playing at the ever-popular Coppenhall Social Club in North Street.
Diego and Cristian grew up in St. Louis, Argentina. As youngsters they self-taught themselves to play the guitar by strumming along to The Beatles and Bruce Springsteen hits as they sat in the local park for hours on end. Seventeen years ago, they decided to strap their guitars to their backs and head for Europe to seek their destiny as musicians. After busking on the streets of Alicante they were quickly snapped up to perform in the cabaret venues of the popular nearby resort of Benidorm and well, the rest is history.
This year their fabulous two-hour show features something for everyone. These extremely talented young guys play fifteen different instruments between them and sing and dance to their fans’ favourite hits played “Cabeytu-style,” as well as their own compositions, throughout their incredible energy-packed show. Think Scottish and Irish classics, Country Hits, Rock & Roll, Pop, Rock, you name it. From La Bamba to Riverdance, Living on a Prayer to Can’t Buy Me Love, hits from Mumford & Sons, Coldplay, Avicci and many, many more.
The show will also feature many hits from the Boys’ brand new album “Let’s Get Sweaty!” which is being released to coincide with the Tour.
“We really missed playing over lockdown and can’t wait to get back on stage in the UK again for the first time in three years!” Diego commented. “It’s been a very tough time recently for everyone of course” added Cris, “and we’re very aware that many Benidorm and Cabeytu Brothers fans couldn’t afford or were unable to travel for their holiday to Spain this year. We’re so happy to be able to bring our show to their local city instead.”
It really is a uniquely entertaining show and being at the end of the year it makes a perfect and affordable “Christmas night out” for groups of friends, workmates and families.
Tickets must be booked in advance, online at www.ticketsource.co.uk/cabeytushows or by calling the Box Office on 0333 666 3366 (£2 postage).
“See you there amigos!” added the Brothers.

If you have an event, that you would like to be featured on our Events Calendar, please visit Free Event Listing.