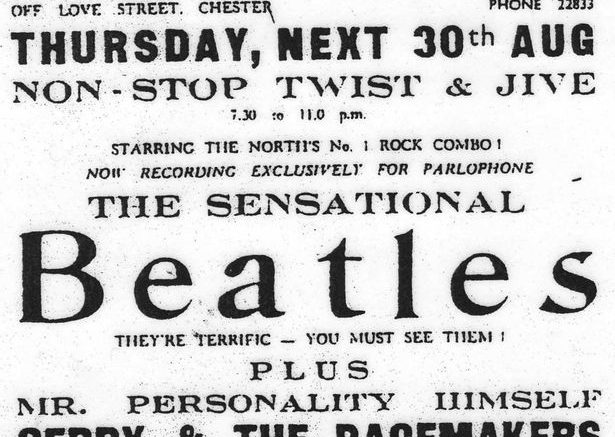 From The Beatles and The Rolling Stones to Morrisey and the Manic Street Preachers – Cheshire has played host to some of the biggest names in music.

Following our story about a legendary Chester music venue being revived, CheshireLive decided to take a look back through the archives at some of those memorable gigs, the unusual venues and celebrated clubs in the county.

We start with the ‘Fab Four’ and head back to 1963 when The Beatles had broken big and Beatlemania was in full swing.

Concerts back then weren’t always the slick operation we see today. One event is still very much spoken about in Northwich when The Beatles played at Verdin Park. It was Northwich Carnival Day and the band performed after Sir Paul McCartney had crowned the carnival queen, Catherine Millington, in the afternoon as the hysterical crowd screamed with delight.

Gwili Lewis was manager of the Memorial Hall and drove the band around the town in a bread van to keep them away from the crowds. But when they arrived at the park and the van door was opened, it was mayhem with girls screaming and the crowd lunging forward to get nearer to the Liverpool lads.

They also played the Memorial Hall in the evening, but Paul and Ringo realised they had left their stage jackets at home so they had to dash back to Liverpool to get them. The Beatles also famously played at Ellesmere Port Civic Hall in January 1963.

Chester has had many music venues over the years, but most have come and gone. The Beatles also played in the city a handful of times during 1962 and 1963. The Fab Four performed to crowds at The Riverpark Ballroom for four consecutive Thursdays in 1962.

The Rolling Stones also visited Chester on three separate occasions during the sixties – the first time being on April 18, 1964 at the Royalty Theatre on City Road. Five months later, on September 14, the band appeared at the ABC cinema as part of their UK autumn tour.

Quaintways was a club and music venue located at Northgate Street. It was owned and operated by entrepreneur Gordon Vickers. During its heyday of the 1960s and 1970s it hosted bands such as Slade, Fleetwood Mac, ThinLizzy, Status Quo, Dire Straits, Judas Priest and the Sex Pistols on September 13, 1976.

The ABC Cinema in Chester held plenty of shows during the 1960s and 70s by Gerry and the Pacemakers and The Kinks in November of 1964. Chucky Berry and The Moody Blues both played in 1965 and Roy Orbison performed in March 1966.

The cinema enjoyed more shows through the latter end of the 60s, with another show from The Kinks and even The Jimi Hendrix Experience on their first European tour. The last concert to be held at the venue was Motorhead on November 11, 1979.

Chester’s leisure centre the Northgate Arena had a shot at putting on a handful of concerts over the years in the late 80s and 90s.

The first concert held at the centre came from Joe Jackson on August 20, 1981. Following that, there were a few more gigs by artists such as New Model Army in December 1991 and Levellers in May 1992. Notable performances also include The Prodigy in 1994, former Smiths frontman Morrissey in 1997, and Manic Street Preachers in 1998. The last show to be held at the venue was Ocean Colour Scene on April 22, 1999.

The Live Rooms in Chester opened in 2013 and has put on a number of acts.

The first big band to play the venue was The View on October 17, 2013. Following that, the club made a name for itself and attracted the likes on rock band Pure Love and Gary Numan in 2014. They continue to put on both local and international artists.

Chester Rocks, was a festival than ran for three years. The 2011 line-up included Iggy Pop and the Stooges, McFly, Taio Cruz, The Wanted, Feeder, I Am Kloot, Sugababes and The Saturdays. In 2012, The Courteeners, Pixie Lott, Katy B, Labrinth and Tinchy Stryder all performed and 2013 saw Jessie J, The Wanted, Lawson and Union J play sets.

The Charlatans went back to where it all started in 2018 – with a run of special gigs in Northwich. The band played four dates at Northwich Memorial Court – and also included themselves in a week of musical events round the town.

Stockport isn’t in Cheshire any more, but Jimi Henrix quite famously once played there when it used to be in the county. In 1967 The Jimi Hendrix Experience performed at the Tabernacle Club in Stockport, which was in Cheshire in those days, built in a sandstone cliff in Underbank.

The Limelight club in Crewe opened up in a former church in Hightown in 1994 by Ray Bispham, a former radio and TV engineer. He opened the club as he just wanted bands to have somewhere to play in Crewe.

A reclaimed toxic-waste dump next to the river Mersey in Widnes seemed an unlikely staging post for one of the UK’s biggest bands of the time but that was always part of Spike Island’s appeal.

The Stone Roses could have had their pick of venues in 1990. But they wanted to go somewhere “different”, Ian Brown said in 2010. “We wanted to do something outside the rock ’n’ roll norm. This was back in the days of raves, remember. We started out doing warehouse parties and we still had that mentality where we wanted to play different venues. We wanted to play places that weren’t on the circuit.’ At one point in the show a rising tide on the river threatened to flood the whole gig.

Parr Hall in Warrington is probably Cheshire’s most enduring venue. There have been many great gigs there and the layout of the concert hall is ideal for a gig. The Rolling Stones played at Parr Hall in November 1963 and after that many famous gigs have been staged there including the Arctic Monkeys and curiously enough the Stone Roses reunion.

Perhaps the most memorable was the Viola Beach celebration in April 2016 – a special one-off concert featuring the likes of Courteeners, Blossoms, The Zutons and The Coral – when north west groups paid tribute to the Warrington band and Woolston manager Craig Tarry after their tragic deaths.

Some of the best ice cream farms and shops around Cheshire