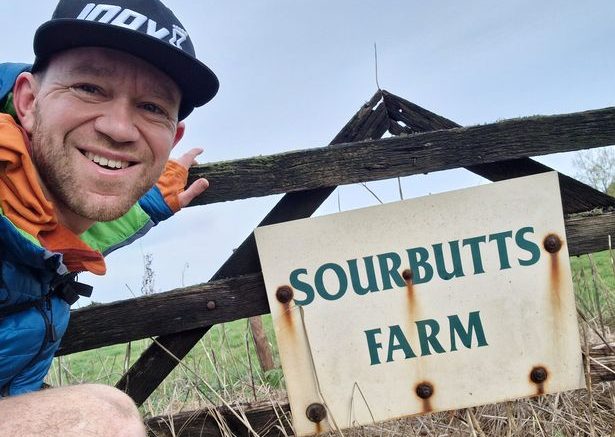 A hiker has completed the ‘UK’s rudest walk’ which included stops at several amusingly named places in Cheshire – such as Andrew’s Knob and The Cock In Treacle.

James Forrest, 39, began his 326-mile charity trek from his home in the Cumbrian town of Cockermouth before finishing at his brother’s address in Lickey End, a village in Worcestershire. He undertook 11 marathons in 11 days during his hilarious, innuendo-fuelled trek.

During his Cheshire leg, James summited the peak of the 360m hill, Andrew’s Knob, visited Cock Head and Cock Knoll farms, both in and around Disley, as well as stopping at Sourbutts Farm near Macclesfield. He also paid a visit to the Dandy Cock pub in Disley and The Cock In Treacle in Macclesfield, as well taking selfies at Bottoms Reservoir in Langley and nearby street, Cock Hall Lane.

Elsewhere in the country, James’ trek took in visits to woodland labelled Nanny’s Breast, a nature reserve called Nob End, and a waterway titled Bottoms Reservoir in his pursuit of pun-filled places. And he visited crudely named streets in Cumbria, Staffordshire and the West Midlands, such as Bell End, Cocking Yard, Ten Butts Crescent, and Number 2 Passage.

James said: “There was a certain poetry to it, with me living in Cockermouth and my brother moving to near Lickey End – and some silly banter led to a bet that I wouldn’t do it. I hate losing so I ended up going for it, just to prove my brother wrong. 526kms later and I reckon I might just have completed the UK’s rudest hike.”

Adventurer James, a freelance writer, said he came up with the hilarious idea after his brother moved home and then challenged him to take on the epic journey. And he said his incredible trek, which he did to raise money for testicular cancer charity Baggy Trousers UK, was a fun-filled celebration of “British eccentricity and quirkiness.”

He added: “Some people think it’s inevitably a bit childish. But I think most of those people just don’t have a sense of humour, and many saw the funny side. Ultimately, I like to think my journey was a celebration of the very best of British eccentricity and quirkiness.”

James, who began on October 26 and completed his journey on November 5, said he treated finding rudely named roads, peaks and points of interest like a “treasure hunt”. His favourite finds included Willey Lane in Cockerham, Butt’s Fold in Cockermouth and Twatling Street in the Lickey Hills.

And he said he was particularly proud of himself for finding the hilariously-titled Gloryhole sculpture in Bilston, West Mids. He said: “That was a really tricky one to find.

“It’s a sculpture dedicated to industrial heritage in the region – it’s called the ‘Gloryhole’, and there’s a sign saying ‘Gloryhole’ next to it. I was wandering around Bilston trying to find this sculpture. I didn’t want to say to someone, “Excuse me, do you know where the Gloryhole is?”

“When I found it, I got a photo. That one gave me the most satisfaction.”

James’ hike raised money for Baggy Trousers UK, a charity tackling testicular cancer. Lee Procter, from inov-8, the sports brand that supported James’ walk, said he had grabbed his opportunity “by the balls.”

He added: “James grabbed this challenge by the balls and raised crucial awareness for something of huge importance. He might be the butt of a few jokes in the days to come, but we’re all super-proud of his achievement.”