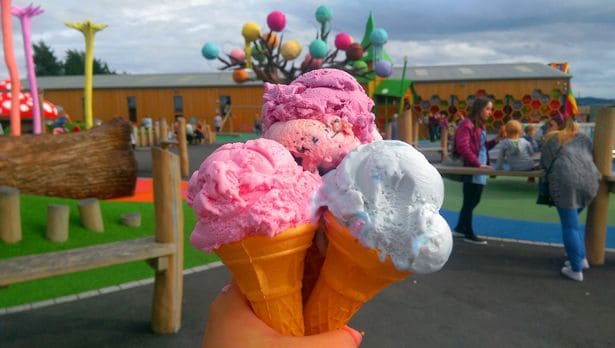 Nothing beats heading out for an ice cream – especially over a sunny Bank Holiday weekend. And with the weather over the Jubilee weekend being generous so far, many will be looking for spots to visit for some fresh ice cream.

The Manchester Evening News has rounded up some of the prettiest ice cream farms and makers around Cheshire and Manchester. Some boast stunning views, while others have great facilities for kids.

But all of them boast lots of delicious ice creams. Ranging from traditional flavours like raspberry ripple or more adventurous with the likes of lemon trifle or bubblegum ripple, there’s a range of flavours on offer at the ice cream makers we’ve listed here.

And as always, if there’s a great ice cream farm that you love to visit that’s not on the list, then let us all know in the comments at the bottom of the article.

Here are some of the best ice cream farms in Cheshire:

The mother of all ice cream farms in Cheshire is The Ice Cream Farm – and it’s legendary among parents as the play area here is VAST. Naturally that means it’s a very, very popular location for the family crowd so you’re recommended to book in advance to get in to avoid disappointment as they do have a limit on numbers.

There is, however, now a drive-through option as well which is rather handy if screaming kids is not exactly your idea of heaven. Although be warned that also gets really, really busy.

It’s based in the very rural Tattenhall on the way to Chester, and that means some stunning views along the way, including of the area’s two big castles at Beeston and Peckforton.

Set in a beautiful location next to the canal lock in Diggle, Grandpa Greene’s has become so famous for its home-made ice creams that people queue right down the lane (and, yes, so do the cars).

It’s a stunning spot though, and a gorgeous array of ice creams to buy that you can take away and sit and admire the views. Or there’s also an extensive array of indoor and outdoor seating with a full cafe menu of treats.

The ice cream is all made in Greater Manchester by a family continuing the tradition of their “Grandpa Greene” who first started making ice creams in the back yard of his corner shop in Salford. It has proved so popular it’s started to go on sale at a range of farm shops across the region and plans for further cafes in the pipeline coming soon.

Look out for the jaw-dropping afternoon tea served on mini picnic benches if the ice cream isn’t enough to satisfy your sweet tooth.

This one has got the Harry Styles seal of approval – the Cheshire native took his One Direction bandmates to the Great Budworth Ice Cream Farm near Northwich in their boyband heyday in 2014. And he is apparently a bit of a regular when he’s back in this part of the world.

And what a truly beautiful part of the world it is – the ice cream farm can be found just on the edge of one of Cheshire’s most beautiful villages. It’s so picturesque that Great Budworth has been featured in all sorts of film and TV shows.

The family-run business was started as a sideline for the dairy farming Wilkinson family 28 years ago. But mum June Wilkinson still makes all the ice creams today at the age of 76.

Her son David and daughter-in-law Rachel run the ice cream farm shop and offer a range of traditional flavours as well as regular specials – like the popular salted caramel and chocolate chip that was initially created to celebrate the birth of Prince Louis in 2018 but remains a firm favourite among visitors.

Boasting stunning views out across the Cheshire Plain and to Jodrell Bank, the long-established Bidlea Dairy near Holmes Chapel only started producing ice creams through lockdown as a way to utilise surplus milk when restaurants were forced to close. But it fast became so popular that what started as a pop-up soon gave way to a huge extension with purpose-built cafe, sprawling terraces with wonderful views.

Next up are plans for a petting zoo for kids, and you can visit some of their highland cows on the site too.

There’s a vast array of daily changing flavours inside the cafe, as well as a full milk shake vending machine service and a raft of other creams and dairy products the team here produce. There’s even ice creams developed especially for dogs.

If it’s an ice cream with a view that you’re after, then none are quite so spectacular as up at Blaze Farm in Wildboarclough, Macclesfield. The ice cream farm shop and cafe boasts a terrace with simply stunning views out across the Cheshire plains and the Peak District.

There’s also a pretty nature trail, with easy and more challenging routes depending on how ambitious you’re feeling (or how many children you have in tow). The easy route is suitable for prams, and kiddies will love the duck pond and spotting all the sheep in the fields.

The family-run farm has been making ice cream here for over 20 years and won several awards for its Hilly Billy brand. The Turkish Delight special is the stuff of dreams, and there’s weekly specials like bubbelgum ripple alongside old favourites like mint choc chip.

There’s also a full tea-room menu of hot and cold dishes, and a hillside slide that you will probably have to prise children away from.

If you’re wanting to really go to town with your ice cream treats, then the Seven Sisters Ice Cream Farm is the place for you. Billed as the home of “posh ice cream” in a farm on the outskirts of Knutsford, Seven Sisters has become known for their array of ice cream sundae options, as well as the classic cones of course.

Probably just as famous for its ice cream as for the dramatic straw sculptures in its field, Snugbury’s has been a popular location to head for an ice cream in Cheshire for the past 20 years. Based near Nantwich, you can’t really miss it thanks to the 40ft high giant bee sculpture that is currently in the field.

Ice creams are all produced on the family-run farm, and the shop itself is based inside an old barn along a pretty cobbled courtyard.

Once you’ve bought your ice cream (choose from a raft of 50 quirky flavours including their jubilee special inspired by that lemon trifle pudding) you can have a leisurely stroll out to the field and walk all around the bee sculpture and get an obligatory selfie.

Here are the best ones that are nearby in the Manchester areas:

Dunham Massey Ice Cream Farm can be found inside a converted old barn on extensive farm land that is always popular in the summer months thanks to its beautiful wild flower meadow and sunflower field. It’s based in the historic village of Dunham Massey, which feels like you’ve stepped into a bygone world despite being just off junction 7 of the busy old M56.

There’s also a huge indoor and outdoor cafe here, as well as boutique-y shops to pick up some quirky gifts.

Ice cream lovers in the north of the region will no doubt have heard of Frederick’s. The family-run business makes luxury Italian ice cream that attracts customers from far and wide, with long queues outside its cafe on the A6 in Chorley.

But they’ve expanded to other locations too – including at The Pavilion in Mesnes Park, Wigan offering a pleasant spot to sit and savour your cone or to walk around the landscaped gardens. And don’t forget to rub the “lucky foot” of the statue here of Sir Francis Sharpe Powell.

“Women are told we can have careers and be mothers, but it isn’t true,” says Cheshire mum