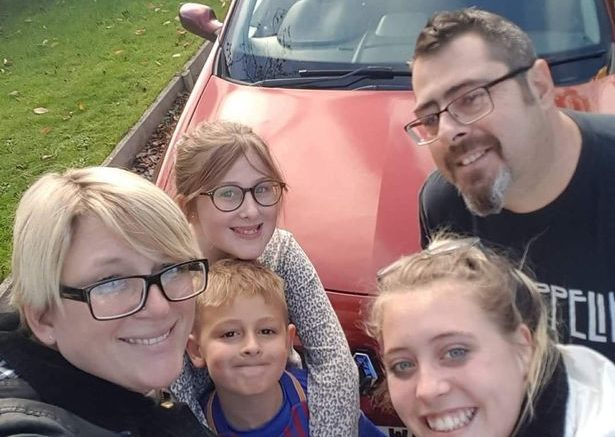 A heartbroken wife has told of the devastating moment she woke up to find her husband dead in bed. Ali Panagi described Cheshire chip shop owner and dad-of-three George as “one of a kind”.

Following the 53-year-old’s sudden death, a fundraising page has been launched to meet the costs of his funeral. The couple – who had been married for 14 years – had gone to sleep at their home in Madeley, Staffordshire, as normal earlier this month.

But Ali soon realised something was seriously wrong the following morning George – who owned The Village Chippy in Audlem – failed to turn off the alarm, reports StokeonTrentLive.

READ MORE:Devastated wife of Cheshire man who killed himself over Horizon scandal says she blames the Post Office

The 41-year-old said: “The alarm was going off so I reached over George to turn it off, he felt a bit cold so I pulled the duvet over him. It felt different so I jumped out of bed and went around to his side. He was lying on his side and his lips were blue.

“I rang for an ambulance and started doing CPR. I carried on until the paramedics got here which was about 20 minutes. He was pronounced dead at around 8am. I was like ‘this can’t be happening’. He had underlying health issues but everything was OK. He had just been to the hospital for a check up and it was fine, it was all very sudden.”

George leaves behind his children Max, aged 10, Alexi, aged 12 and Paige, 26. While he suffered from health issues, the cause of his death on April 16 remains a mystery.

He had been involved in a motorbike accident in 2007 and was unable to walk for nine months. Although his mobility had changed, he carried on working. Three years later he had open heart surgery to have a mechanical valve fitted. But in 2016 he contracted a bug which attacked the valve and he spent another six weeks in hospital.

Ali added: “He has been dealt some rubbish cards but has always got through them. He was in the best state of health he has been in – he was losing weight. He was on a waiting list for two new hips but that never stopped him from working. It was a huge shock.

“I am lost for words and still can’t understand why it happened. It’s just a waiting game to hear back from the coroner.” A GoFundMe page set up by a family friend has already surpassed its £5,000 target.

Paying tribute to chef George, Ali added: “He worked hard and wanted to make memories with me and the kids. He was one of a kind. People used to ask him how he was and he used to say ‘I’m living the dream’.

“He was a proper family man, generous and hard-working. He was a big biker and loved his motorbikes, rock music and travelling. It was all about making memories with myself and the kids. He was very family oriented.

“There were so many memories we shared together. Would you choose your wedding day? The day the kids were born? Walking down the street in Paris getting a crepe stuck in your mouth? Every day with George was a special day, there was always something.

“Everyone is devastated and shocked. We’ve had a lot of support and I can’t thank my family and friends enough, without them I don’t know what I would’ve done. The support we have received is mind blowing and reminds me how precious George was. People have been so generous, I can’t believe it. It’s very heart-warming.

“The money will go for a funeral and making memories with the children because it’s all he wanted to do.” Support the fundraising appeal here.

The ‘charming’ Cheshire cottage perfect for a walking holiday