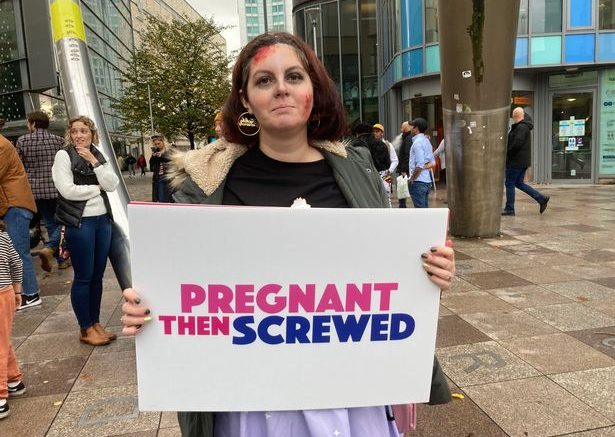 A Cheshire mum has spoken of how balancing a career and raising a child is not possible for women due to a lack of support and the cost of living crisis. Hundreds of parents took to the streets of Manchester to protest today as part of the national ‘march for mummies’ campaign, and Cheshire mum Allie Cusick was among the crowds.

The 35-year-old spoke with the Manchester Evening News about the challenges facing mums in work. The working mum, who was in Manchester with her husband David and four-year-old son Monty, says they split Monty’s childcare between three days at pre-school, one with a childminder, and one with David’s parents. But the cost of living crisis has seen childcare costs become much less manageable.

Compared to three years ago Allie says she is now paying around £10 per hour more on childcare – which can regularly equate to almost £100 more per day. She has been forced to cut down her working hours and change jobs to make sure they can care for Monty – but will be protesting in Manchester this weekend to ask the government for more support.

Allie said that upon her return to work after maternity leave, she went from working full-time to a four-day week – because financially, the cost of childcare for that extra day equalled what she would earn at work.

“It actually doesn’t make any difference whether I work four or five days a week,” she told the M.E.N. “So I can either stay at home and look after my son, or I could go to work and pay for childcare. But if I do that, financially I come out the same.”

During Covid, Allie and David bought a house with the money they saved from David being furloughed and therefore saving on childcare. But now both parents are out the house working again, she is worried about how they are going to afford their bills.

“I work in the NHS, and was working lots of extra hours during that time. So that and not having to pay for childcare combined, we saved enough for a house,” she explained. “But now, it feels like it doesn’t make financial sense to work as a woman.”

She said she will soon be moving to a new job because of pressure to increase the family income due to childcare costs – taking on a role that is less senior than her current one but helps her bring more money home.

“Women in the workforce are told we can have careers and we can be mothers – but actually, that’s not true,” she told the M.E.N. “Because if we don’t have the childcare support that allows us to work, we’re going to be coming out of the workforce because it doesn’t make financial sense for women to work anymore.”

At the moment, the pair rely on David’s parents to look after Monty one day a week. But they both still work, and have had to take a cut to their household incomes to be able to do this.

Allie said she felt having to rely on family members for help with childcare should be a ‘personal choice’ rather than a ‘necessity’.

“I think that if the childcare system was funded appropriately by the government, then it can be a choice,” she told the M.E.N. “It can be a personal choice rather than a personal necessity to be asking someone else to reduce their household income.”

The family are joining the ‘March for Mummies’ in Manchester this afternoon to call on the government to provide better support for working parents. Organised by campaign group Pregnant then Screwed, similar marches will take place simultaneously across the country in cities including London, Bristol, Newcastle, and Glasgow.

On their website, organisers from Pregnant then Screwed said: “Childcare providers are falling like dominos, mothers are dropping out of the workforce in droves, the gender pay gap increased in 2021, and more families are now living in poverty. Have you had enough yet?

“These are political choices made by our Government and the only way we make them listen is if we organise. On Saturday October 29 we will be marching in 11 cities across the UK to demand that the Prime Minister priorities: childcare, parental leave and flexible working. Please join us, we need you!”

Allie hopes the march will send a clear message that childcare reform is needed in the UK. She told the MEN: “I hope it is a wake up call to show the Prime Minister that although we are now in a kind of financial crisis in the UK, there is a different way of doing things.

“When you look at other systems in the world they are leaps and bounds ahead of the UK. I’d like the government to do a review of other worldwide childcare systems and come up with some proposals to better support specifically women in the workplace.

“I think we’d see a massive impact on the economy if that was viewed appropriately and measures were taken to mitigate what we’re seeing at the moment.” The March for Mummies will start at 11am at St Peter’s Square today (October 29). More information can be found on the Pregnant then Screwed website.